How to Become a Trusted Advisor & Not Just a Sales Person

In this episode Marvin Montgomery “The Sales Doctor”, Author, and Motivational Speaker shares how to become a trusted advisor, and not just a salesman. After the tip, we go backstage and learn about, Getting “Marvinized”, Hooking the big fish, The ABC’s of Giving, and more!

Hi my name is Marvin Montgomery better known as the Sales Doctor, and today we’re going to talk about how to become a trusted advisor and not just a sales person.

The second benefit that comes from asking questions and active listening is you show people that you care. We’ve all heard the expression people could care less how much you know, until they know how much you care. So are you showing people how much you care are you actually eliminating assumptions? In other words guessing that you know what they need instead of asking and listening to find out what you need. Active listening is extremely important because that’s the second part of that asking questions and active listening. Because when you actively listen that means you’re not waiting the talk, because when you’re waiting the talk that means you’re using your spare thinking time to drift off, zone out, shut down and you’re not paying attention to what the person is saying.

so there’s some techniques that can be used to actively listen. You can paraphrase back, repeat back what they just said. You can ask questions, that again shows that person you’re interested. You can physically show them you’re paying attention by nodding of the head, leaning forward. If you’re on the telephone you could also do a technique which is called acknowledging or attending to what they’re saying, by just saying something simple as Mhm, I see, continue. Because if you don’t do that they’re going to ask you a question which says “Are you still there?” and maybe you’re not. So are you actively listening or impatiently waiting? Are you actually letting them know that you’re paying attention what they said? 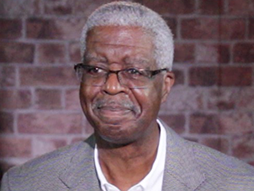 Marvin Montgomery For more than 30 years, Marvin Montgomery has earned widespread national recognition and praise for his informative, practical and stimulating programs. Marvin’s captivating presentations have assisted hundreds of organizations to meet or exceed their sales goals using his training programs. Click here to find out more about Marvin